Built in Neochori, the Nevros Hotel creates magnificent, yet distinct scenes to the visitor. Built with wood and stone, it retains the principles of traditional local architecture. Neochori is a small village stretching on the slope above Lake Plastira, many of which believe it offers the best view of the lake. Nevros Hotel Resort & Spa gives you the opportunity to experience an unforgettable weekend. The rooms are famous for the warmth and relaxation that a guest seeks.

Nevros Hotel Resort & Spa has 21 rooms. Rooms offer all the customer needs in order to better serve and which will make him/her spend unforgettable holidays on site. The rooms are divided into the following categories: Executive Suite (Maisonette) with the best views of Lake Plastira, the Junior Suite (for families of four and above - maisonette) with double bed on the lower floor and two singles on the top, Deluxe suites located in the new wing of the hotel with fantastic views over the lake of Nikolaos Plastiras, the connecting rooms, consisting of two spacious double rooms with shared corridor ready to accommodate from two to five people, the standard double rooms located in the central wing the hotel and have stunning views of the lake, and the room for special needs addressed in our people with specific needs, but not only (can be used as a classic double standard room).

The Nevros Hotel Resort & Spa combines tradition with modern cuisine combined with the astonishing lake view. Both restaurants, central and tavern, offer fantastic views of the lake. Traditional flavors and modern cuisine cater both the easygoing and the most demanding clients. The hotel chef awaits you to taste the gastronomic dishes, and relax while enjoying the magnificent view of Lake Plastira. The hotel's tavern has become a trademark, and every Sunday it turns into a modernized "tsipouradiko" (a place where you can eat traditional snacks/appetizers and drink "tsipouro", a strong distilled Greek spirit containing 40-45% alcohol by volume and produced from pomace -the residue of the wine press).

What characterizes Nevros Hotel is the spa facilities. Wellness, relaxation, enjoyment, all within a perfume area at the Aloe Spa Center. Sauna, Hammam, Jacuzzi, Scottish shower, massage room, fitness center all in one room made with passion. There is also the possibility to reserve the "privet" space and spend beautiful moments with your fellow-man/woman. Various programs, such as essential oils, chocolate therapy, aromatherapy and much more are in your choices to choose from. The best trained staff is always available to solve any information you want.

Lake Plastira is located on the plateau of Nevropolis in the District of Karditsa. In fact, it is called Lake Nicholas Plastiras (Lake Plastira -named after the Greek Prime Minister, Nikolaos Plastiras), and is located 30 km west of Karditsa. The lake is artificial, and was created after the construction of the barrier, a huge arc-shaped structure 83 meters high and 200 meters long. It occupies the mountain range of Agrafa and is an adornement not only of the District of Karditsa, but also of Greece. Its official name is Lake Tavropou. It was formed in 1959 with the completion of the dam at the south end of the River Tavropos or Megdova, and the idea of ​​its construction was attributed to the military and political "Nicholas Plastiras" when in 1935, after disastrous floods in the region and Macedonia from constant rainfall, he visited his hometown and, seeing the site, he said "that one day it will become a lake." Its financing was made from Italian war reparations, and the construction was undertaken by a French company. Nowadays, the management of the dam has been taken over by the PPC. Before the construction of the lake, there was on the plateau the so-called "Neraida" (fairy) airport, which was created during the occupation by the English, where the first allied plane landed in the occupied Greece (August 1943). It contains 400 million cubic meters of water, it has a maximum length of 12 km, a maximum width of 4 km, its total surface is 24 km2, its maximum depth is about 60 m and its maximum altitude is 750 m. Its water is used for irrigation and power generation. In recent years, tourism has also developed, with several activities on and around the lake. 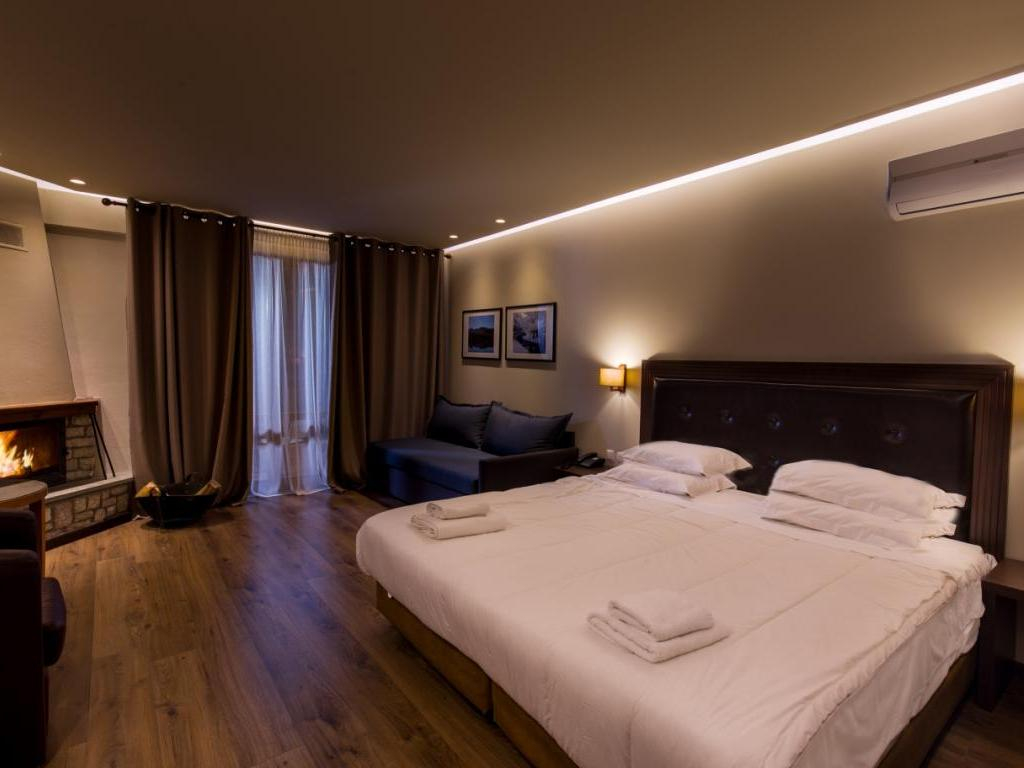 Adventures with 4x4 on dirt roads, cycling and trekking in beautiful forests, chilling out in the hotel room overlooking the lake and the snow-covered mountains, rustic delights in the taverns. A favorite mountain destination for nature lovers and fans of alternative sports and families, Lake Plastira at an altitude of 750m in the southwest of Karditsa district, is surrounded by 18 beautiful and picturesque hamlets and has developed tourist infrastructure. Do not leave unexplored any of the 55 km required to complete the lake round, which covers an area of ​​approximately 25,000 acres. "Neochori" -the most developed tourist area in relation to the other villages- spreads on the slope and offers panoramic views of Lake Plastira. Also known as "Beach", "Pezoula's Kalyvia", a stone's throw from the lake, on the southwestern side, took its name from the one-storied, rugged mud and reed constructions in which the farmers of the area stored their agricultural products and tools. In the village you will find businesses that organize outdoor activities, such as horse riding and archery, as well as many taverns. "Neraida", in the fir trees, at an altitude of 1,120 m and overlooking the breathtaking lake, is ideal for trips to the "Alexandri" fountain or the "Theotokos Genoese Temple" (16th century) 3 km northeast of the village. "Kastania", hidden in a spruce-covered area, is the ideal destination for the lovers of the campsite, as an organized camping is located in the area. Do not leave the site without visiting one of the three remaining stunning crafts of "tsarouchi" in Greece ("tsarouchi" is a type of shoe -the most common footwear worn by both urban and rural Greeks, mainly men, typically known nowadays as part of the traditional uniform worn by the Evzones of the Greek Presidential Guard in Greece). In the village there are rooms to rent and a community hostel. Other beautiful villages are "Pezoula", built on the banks of the Great river, with the houses of the settlement spreading on both sides of the chestnuts' ravine, fir and oak trees, and "Belokomatis", perched on a picturesque slope of mount Agrafa, with the stone houses, flowered courtyards and wood-carved balconies to "decorate" its narrow streets. The District of Karditsa occupies the southwestern part of Thessaly. It has an area of ​​2,636 sq. Km. and a population of about 113,000 inhabitants. Capital of the district is the city of Karditsa.

Lake Plastira is an ideal destination for every season. A human intervention that managed to combine artificial and natural. Magical location where Fairies and the Sleeping Beauty found shelter in the forests. A place for visitors looking for peace and tranquility, but also for those who seek for adventure combining mountain and lake activities. In the area you can take part in adventure activities such as, i.e. climbing at "Porti" in "Mouzaki", horseback riding, canoeing, kayaking, swimming, hiking, cycling, shooting, fishing with cane etc.